Even though it’s been several weeks since the horrific killing at the weekly newspaper office and the kosher grocery store in Paris, the fictional character of Charlie Hebdo is still making headlines around the world. The main reason for Charlie Hebdo remaining in the news is that street demonstrations in many parts of the world are still erupting, especially in nations with large Muslim populations. For the most part the mass protests have been peaceful, but on occasion violence and even deaths have resulted from the public actions.  Even when these demonstrations and acts of violence have come to pass, the name of Charlie Hebdo will be one that is not soon forgotten.

When I first heard the news about the attack on the newspaper offices, my first reaction was where did this name come from. Part of my surprise comes from the fact that I have traveled in France and Quebec, and even though my comprehension of the language is not very good, I knew enough to surmise that this is not a common French expression. Charles DeGaulle, now that is French, but Charlie Hebdo, who in the hell is he????

Unfortunately, this news story did not end with the dozen people killed at the magazine office. Sadly to say, a couple of days later another killing spree occurred at a Paris Kosher store that left five more people dead. Only after the assailants were killed and the loss of life came to a halt, were we able to step back and take a look at why the activities of the satirical publication were taken with such hatred and outrage. It was also at this time that the meaning of the words were first discussed in any detail.

As it turns out the Charlie in Charlie Hebdo comes from the American comic strip called Peanuts, where the main character is an ageless middle-grader, named Charlie Brown. So popular is this cartoon that it continues to appear in many daily newspapers, even though its creator, Charles Schultz, has passed on to that great cartooning cloud in the sky. Though I am proud that a major French publication would name their weekly rag on a popular American “funny”, it is beyond me to figure out how Charlie Hebdo became so ghastly humorous.

And Then There Is This Word Hebdo

A t first glance hebdo looks like a Spanish word, but on further examination, the Greek-rooted word, (hebdomos in Greek) is an archaic reference to the number “7”. In this context, hebdo becomes a publication that is put out every seven days or once a week……And it is also a satirical effort that honors Charles Schultz, Peanuts and Charlie Brown.

As far as I am concerned, all of this just does not add up. The satire put forth by Charlie Hebdo is so far removed from the comic strip that it would be laughable, if it had not lead to the death of so many people. Over the ages Europe, including France has been party to invasions from the Islamic world. The siege of Vienna in the 1600s and the Moorish influence in Spain are the two such events that come to mind, though I now understand that there are other similar acts in European history.

Given these historical incidents, I would think that the French satirists would do better in their roasting and ridicule of non-European foreign entities. I have no idea how this story will end, but I cannot see how this conflict will not become more caustic in the near future.

The Fifth of May Explained

The Cinco of May is nothing but a Spanish expression for the fifth of May; the date, when a famous battle took place in Old Mexico. The year was 1862 and the place was the Colonial town of Puebla. Though outnumbered two-to-one the Mexican army defeated the French regulars lead by General Lorencez. At the time the US was involved in a bitter Civil War and so they were unable to take sides in the conflict.

During the 19th century the French made two attempts at colonizing Mexico. The first was called the Pastry War and it occurred in 1838. The second begain in 1862 and for five long years. This invasion was known as the Maximilian Affair.

After thie Fifth of May defeat at Puebla, the French retreated to the Gulf Coast at Veracruz. Here, they regrouped and then were able to dominate Mexican affairs until 1866, when the Mexican militia forced the European occupiers to begin their departure. In 1867, the Mexicans took back Mexico City and executed the French Emperor of Mexico, an unpopular fellow by the name of Maximilian. This stormy period of Mexican history underscores the difficult struggle that Mexicans faced, not only with Spain, but other countries as well.

If you want to celebrate Cinco de Mayo…..don’t go South of the Border……. There’s nothing going on. To really get in the swing of things on the fifth of May, you’ll have to cross the Rio Bravo (for all you gringos that’s the Rio Grande) and visit an appropriate U.S. city or state. Go to the right place and you will see a parade and maybe some bar specials promoting liquid refreshments from our southern neighbor. Cinco de Mayo in the United States has been a time for Mexican-Americans to public celebrate their heritage. 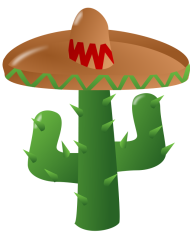 What’s It All About

This is the ebook cover for a small (11,000) word collection of essays that I have just self-published at Smashwords.com. There are about 10 essays all total, covering such diverse topics as Icelandic yogurt and the Vienna Opera. It is not all original writing for some of the writing has appeared online at various journals and general interest websites. The title comes from John Kennedy’s speech in Berlin of 1963, when he reassured West Germans and warned Russians that the US supported the small enclave in East Germany 100 per cent. Later, the story circulated that JFK’s famous words, (Ich bin ein Berliner) really implied that he was a jelly doughnut. Since the news item broke (it was reported at such prestigious places as CNN, the BBC, MSNBC and the NY Times), this viewpoint has been pretty much relegated to the realm of urban fiction. Still, the life of the story makes for a good tale.

Besides JFK’s remarks made in Berlin, the text includes travel stories about Iceland, Denmark, Germany, Austria, Italy and France. The material is a result of two month long voyages, I made in 2003 and 2006. For a link to the book you can click on the image.

Putting the Cover Together

I had fun putting the cover together. I started with a NASA photo of distant space, then I added the jelly doughnut on a plate. I picked this image up on Wikipedia and I believe the image comes from Berlin, which is the geographical locale of the Jelly Doughnut story. Finally, the text was added. Everything was done in an old Photoshop Elements software program, which I paid 25 dollars for years ago. Photoshop was necessary to isolate the dish and also to get curved text. To be honest I am quite pleased with the way everything came out. Having a good cover is very important to promoting an Ebook, for most interest come from curious individuals, who see the image online and then become intrigued by the text. That’s kind of how it works at least for me.

In The USA and Elsewhere

Though a French holiday, Bastille Day in the US is celebrated in many urban areas, including New Orleans, Baltimore, San Francisco, Philadelphia and New York City. Around the world, you can find lively festivals in Hungary, Belgium, the UK  (London) and Quebec Province in Canada. Like the Fourth of July in the US and Canada Day (July 1), this July holiday provides a convenient excuse for lighting up the summer’s night sky with a flurry of fireworks. I guess there is something in our human nature that wants to do this kind of activity on some of the shortest and warmest nights of the year.

The Bastille was originally a fortress built between 1370 and 1380 by King Charles V of France. However, over the years, the mighty structure was used more often to keep prisoners in rather than invaders out. And so over the following centuries, the towering walls were frequently used to contain the favorite enemies and threats to the Kings of France. This change occurred most notably around 1600 during the reign of Henry IV and his son Louis XIII. The heyday of the prison occurred during the reign of Louis XIV, when over a thousand prisoners, mostly political were housed here.  By the time Louis the XVI came to power the prison was mostly used to hold a small number of petty criminals and degenerates.

And in 1789, when the building was stormed by protesters the place only held eight only prisoners with over a 100  troops defending the gigantic edifice.  On the day the Bastille fell, nearly a hundred protesters died, while just a few of the defenders perished. Still, the attackers managed to get inside and seize much-needed ammunition and gunpowder for their cause. They also captured several Swiss defenders and executed them in the street.

Importance of the Bastille

The importance of the Bastille was more symbolic than anything else, for it represented two centuries of rule by powerful French kings, who had no second thoughts about incarcerating royal dissidents. The building’s destruction also gave the revolutionary movement a cause and something to cheer about, even though the most hideous days of the prison had long passed.